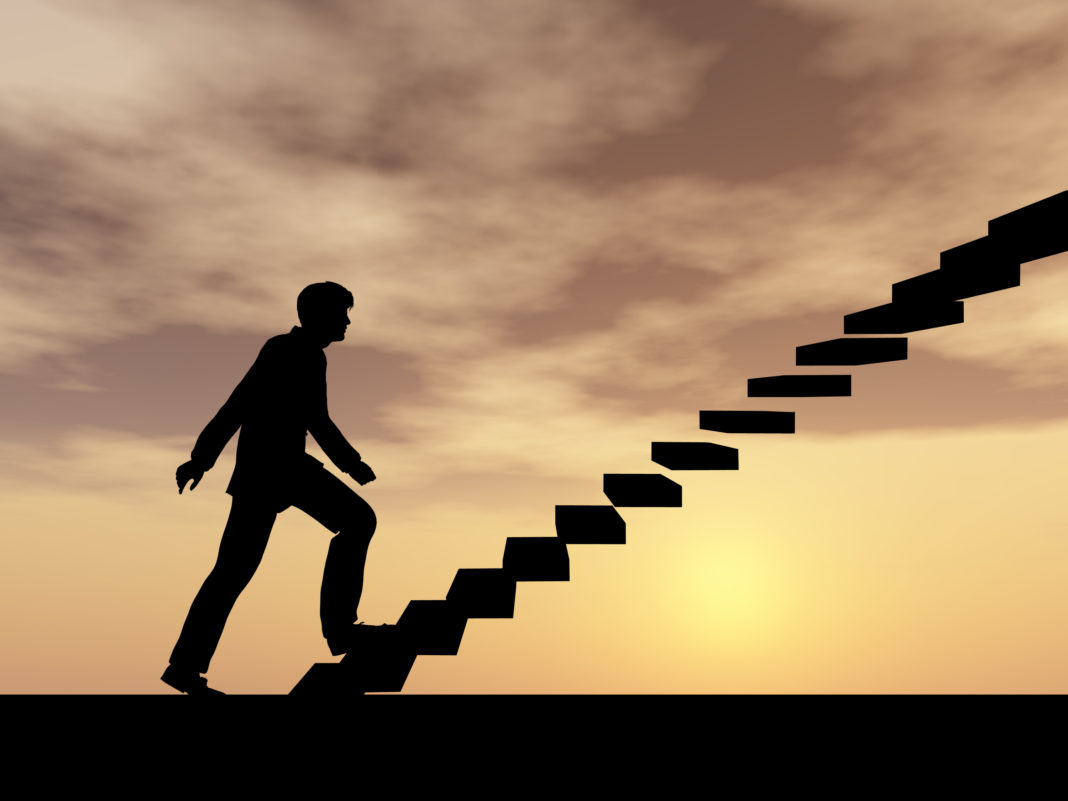 Let me first congratulate you for the endeavor or continuing the Vedic tradition in the western world. This act is not merely a continuation of what all of you grew up with, but it really is the proper path you have chosen. The spread of Vedic knowledge and following of the Vedic tradition by example is a true service to the humanity at large. Maharshi Dayanand has written in Satyarth Prakash, that the degree of lasting happiness in a person’s life is proportionate to the amount of welfare a person has done for others. Today, my talk is going to be on the subject of “The Significance of Studying Aarsh Literature for successful life”.

Successful life is to attain peace and happiness, while enjoying all the materialistic comforts, and even try to attain, Moksha, or salvation. Today, the science has made astonishing progress and people are able to live a very luxurious life if there is an opportunity. The all-important question comes to mind- To what extent have  accumulation of unlimited wealth and material pleasures of the world affected our ability to attain this goal of achieving everlasting peace? Have we become free from greed, hatred and deception? Is our mind immersed in the ocean of happiness? The answer to these questions is certainly is of a negative nature and leads to disappointment. Actually, it is often seen that the more wealth we accumulate, the more we become engrossed in physical comforts and luxury. Simultaneously, we become distanced from lasting peace and happiness.  Even after attaining a high academic degree, we often fail to understand life and, therefore, remain unhappy.  These feelings are the result of our negligent attitude toward principles and practice of the spiritual teachings, known as the “aarsh vidya”. Aarsh means rishinaproktam, or the Holy Vedas and the other Vedic literature written by rishis which conforms to the Vedic teachings.

To achieve this goal, 16 elements have been detailed in this Darshan. These are:  pramaan (proof), prameya (those objects which have been proven by evidence or pramaan as above), sanshaya (doubts), prayojan (aim), drashtanta (example), siddhanta (principle), avayav(the sentences which are used to prove something through anumman pramaan. The real goal of this darshan is to prove beyond doubt that there is God by looking at the creation since there is a perfect order and purpose in this universe. Eeshvar is the efficient cause and the Prakriti is the ordinary cause of this creation and the soul in the end user and efficient cause as well in a limited way.  tarka (argument), nirnaya (decision), vada (discussion), jalpa (dialogue or discussion where the sole aim is to win the discussion and not necessarily to gain proper knowledge), vitandaa (discussion in which one is just trying to negate the opponent’s points), hetvabhasa (even though it may not be real, it appears to be the reason), chhala (deception), jaati (improper meaning), and nigraha-sthan (acceptance of defeat).  There are two traditions of this Darshan, the old and the new. Some details of these 16 elements are as follows.

Pramaan- Pramaa can be achieved by 4 ways. These are pratyaksha or which is obvious and visible either by our 5 senses or our mind. Certain statements such as death is certain, ice is cold, stone is hard or the grass is soft come under this category. Statements made by true yogis because of what they have perceived can also come under this category. Second type of pramaan is the anumaan. Example of this would be where there is smoke; there is fire and not vice versa. Also to judge that there may be a rain coming when clouds are there or to ascertain that there has been a heavy rain when a swollen river is seen. There are many other examples of this such as by watching various positions of moon on different days one can ascertain that moon moves at all times. Third type is upaman. This is when we try to explain certain thing by comparing it with something else. The fourth type is the shabd. This is word of wisdom.

Prameya- To achieve salvation, Maharshi Gautam  has considered 12 of these elements or objects. These are soul, body, senses through which an individual enjoys the pains and pleasures, intellect, mind, instinct, defects or Doshas, rebirth, result, sorrows and finally the total freedom from all the sorrows.

Here is the sequence of events leading to creation. First Mahattattva develops followed by intellect

( buddhi), ahankaar( sense of me or mine). It is because of ahankaar that the individual gets the desires to act, feels the ownership and really is the basis of all that an individual does in life. Ahankaar further leads to development of the senses and tanmaatras and the mind. The five basic elements described above develop from the tanmaatras. There is some disagreement in interpretation of the darshan as to whether it affirms the belief in God in addition to the Prakriti and soul or not. This does however clearly accept the role of God as the sustainer at least.  In this darshan it is quite clear that everyone has full and equal right to seek Vedic knowledge and salvation.

III.    Aasana: physical exercise including postures for relaxation and flexibility.

VII.   Dhyaan: a stage of deeper meditation just before Samaadhi.  Here, there is concentration becomes stable, unwavering and free from other thoughts.

VIII. Samaadhi: This is the deepest state of meditation where a Yogi can connect his/her aatma (soul) with parmaatma (God), reaching a state of bliss, or Aananda.

Five states of mind have been described. These are: Kshipt or very disturbed, Moodha where mid can not make wise decisions, vikshipt where one wavers between right and wrong decision, aikagraa where mental concentration can be achieved and finally the best state of mind which is nirudha which leads to a real peace. This is the best state of mind. The whole idea of practice of yoga to achieve this state of mind and of course a better physical, mental and spiritual well being and even Moksha.

This darshan also guides us as how to live happily in the society. It says that when you see someone unhappy, feel sorry and try to make efforts to remove their sorrows. Be happy when you see a good person. When you meet a wicked person be indifferent. 5 types of sorrows have been described. These are: avidya ( mistaking body as the soul), asmitaa ( considering body and soul as the same thing), raga (intense desire to seek happiness), dvesh (anger) and abhinivish (fear of death). Goal of Yoga is to eliminate these and achieve aanand or lasting happiness.

Maharshi Dayanand Saraswati (1824-’83), however firmly believed that there are three different eternal entities in this universe, the God, Soul and Matter. This concept is called “Traitwad” (Trinity). There are several mantras in the Vedas, Brahaman Granthas and Upanishads, which clearly prove this theory of Traitwad. This view seems to be most logical of all. The Aarsh literature may also include Ramayan, Shrimad Bhagvad Geeta, Satyartha Prakaash and the other notable literature of Maharshi Dayanand Saraswati.

In the Aarsh literature, the principles of common welfare have been given in brief and in a simple format. The literature written purely by humans lacks this distinct quality. In the Aarsh literature, nothing is written with specific focus on a particular nation, race, caste or a group of people. All the principles have been laid down for the welfare of humanity at large. In Yajurveda, there is a mantra in which a person is saying that “I eye everyone with friendly feeling.

Another Hymn directs us all to follow the path of welfare or benevolence.

According to Vedic teachings, there are 4 goals in life.

These are Dharma, Artha, Kaama and Moksha. This means that while conducting daily duties with honesty and justice, one can fulfill one’s desires and needs and even attain salvation or Moksha and be free from all sorrows and unhappiness’s. In philosophical language, it is called the “purushaarth chatushtaya”. In this philosophical ideology, materialism and spiritualism has been emphasized in a balanced and practical way. This is the only real way to succeed in life. Those who spend their entire time and energy in accumulating objects of physical comfort and pleasure don’t seem entirely happy and peaceful. They seem surrounded by many mental and physical problems. Alexander the Great,  who had conquered such a big part of the world and had accumulated limit less wealth said to his people  that when his remains are placed in the coffin, his arms be places outside the coffin to show people that everyone leaves this world empty handed. Desires of a person actually get more intense as more wealth is accumulated. Shankaracharya actually said that the poorest is the one who has the most desires.

This means that no amount of accumulated wealth can satisfy a person and desire to accumulate more continues. This is the reason for unhappiness, mental unrest and many physical and mental ailments.

In Aarsh literature, the principles laid down by our sages to make life successful and prosperous are very balanced. Rishis have had a firm belief that only a side by side and equal development of materialism and spiritualism can lead to peace and happiness in life.

This principle has been given in an explicit form in 9th to 11th  Mantras of Eshopanishad.

In these mantras, Avidya means the materialism and Vidya is Spiritualism Avidya assists us in overcoming sorrows, illnesses, poverty and shortcomings. Avidyaa is also called Aparaa vidyaa and the Vidya as the Paraa vidyaa. The vidyaa helps purify our minds, intellect and the soul. So, it is clear that, those who are engrossed only in materialistic development may be unhappy due to lack of realism about life. On the other hand those are engrossed only in their spiritual development, also remain restless and unhappy. Their daily needs are not met and have to beg from and depend upon others. This also is far from desirable.

Arsh literature  sheds lights on some deep and unseen facts. The soul can attain the state of salvation after freeing itself from all the bonds by achieving true knowledge of God, soul and matter. It appears that the sole aim of teachings of all the Arsh literature is to resolve all human physical, intellectual, mental and spiritual problems and lead us to the lasting peace and happiness (Aanand) which may result in Moksha or salvation. In fact there is no problem of life, which has not been addressed to and given solution of in arsh literature.  Actually, teachings of this literature are connected to knowledge of proper code of conduct, religion (better term will be dharma), objectives in life, health sciences, and knowledge of the three entities as suggested above (God, Soul and Matter). Ample and deep thought has been given in Arsh literature for total human development. Knowledge of God, Soul, different Devatas (which represent God’s attributes and functions), mind, intellect, our duties in life, origin of universe including sun, earth, human creation, facts about this life and life after death, concept of heaven and hell, phenomenon of rebirth, matter or Prakriti, the five elements: agni (fire), jala (water), vayu (air), prithvi (earth) and aakash (ether), five subtle elements: roopa (sight), rasa (taste), gandha (smell), sparsha (touch) and shabda (sound), life and death, time-space and consciousness, understanding of the happiness and sorrows in life with their causes and remedies, human psychology, different states of mind (awake, sleep, dream), etc. are some of the subjects explained in thearsh literature.                                                              Sarve  bhavantu sukinah 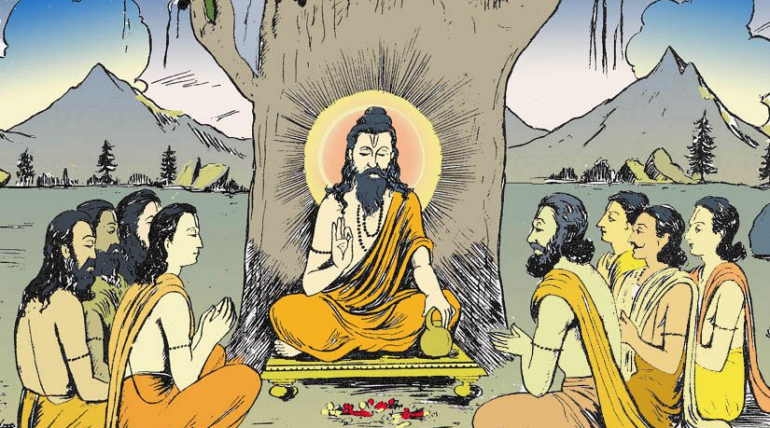 August 9, 2022 0Comment
Introduction Before understanding Upanishads, it is important ...

END_OF_DOCUMENT_TOKEN_TO_BE_REPLACED 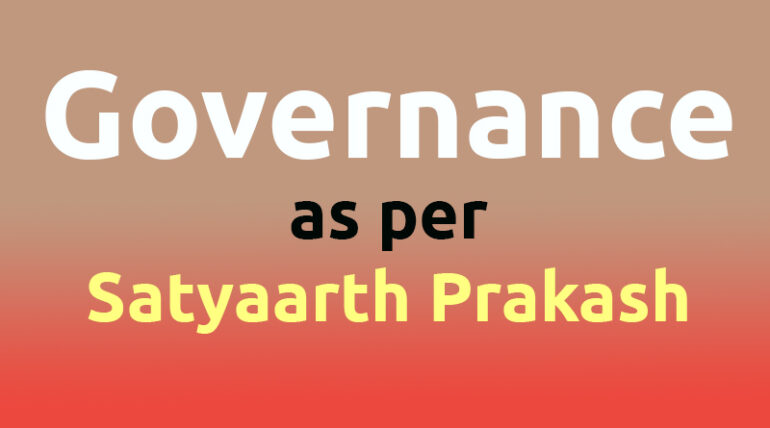 Governance as per Satyaarth Prakash