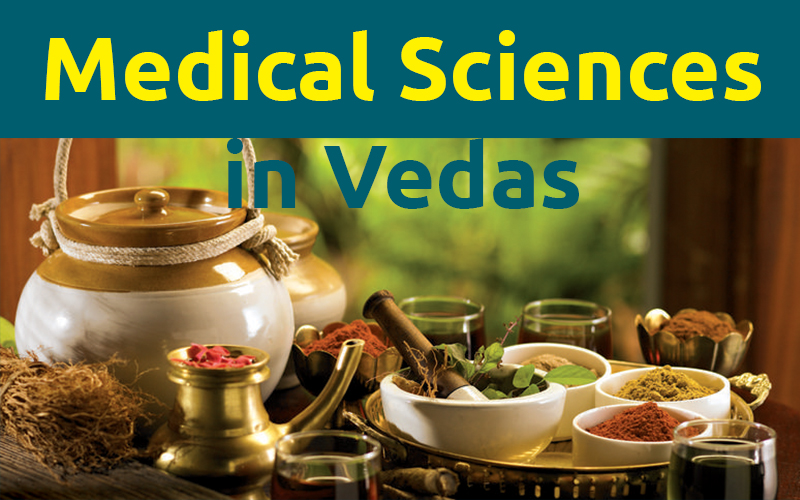 The word for medical sciences in Vedas is Ayurveda. The word Ayurveda comes from Sanskrit word Ayuh (life) and Veda (knowledge), means the knowledge or science of life.

Ayurveda deals with good and bad life (Ayu), as well as happy and unhappy life (Ayu). It explains what promotes health and what affects health adversely. It also deals with what affects life expectancy and the quality of life. A happy person is one: “Who is devoid of mind and body imbalances, whose senses are perfectly functioning, whose body is full of ojas (strong immunity), tejas (shine) and prana (energy), well respected, hardworking, brave, intellectual, scholar, prosperous and can perform all duties without obstacles”

“Person, whose all three humors or Doshas: Vata (air), Pitta (fire) and Kapha (water) are in balance, whose appetite and digestion are in balance; whose seven body tissues (Seven dhatus: rasa, rakta, mansa, meda, majja, asthi and shukra) are functioning normally; whose malas (urine, feces and sweat) are eliminated properly and whose spirit, senses and mind (satva, rajat, tamas), remain full of bliss is considered healthy”

This verse is explained further as follows:

Three Doshas: Vata, Pitta and Kapha are three functionalities that regulate all physiological, psychological and spiritual facets of a person. Dosha can also be referred to as the biological type or the physical constitution. In Sanskrit, dosha is defined as “doshyati iti doshah”. This means “that which contaminates is called “doshah”. Imbalance of vata, pitta and kapha doshas cause disease in the body. Therefore, imbalance of these elemental combinations is the direct cause of an illness. The Vata or the air element governs inhalation, exhalation, movements, discharges, impulses and the human senses. The Pitta or the fire element deals with hunger, thirst, digestion, excretion, body warmth and circulation. It also relates to body strength, energy, youth intelligence and executive abilities. The Kapha or the water element controls the stability, lubrication, movements, body luster, digestive tract, glands and fluids of the body.

Other factors such as imbalance or defect in the dhatus (body tissues), toxins, waste materials etc. are the result of imbalance in the doshas.

Digestive fire: Referred to as Agni, is a term representative of body metabolism, and comprises of digestion, absorption and assimilation. It is vital for turning assimilated food into Dhatus, like plasma, blood, muscle, bone and fat. The food is also broken down to form seminal fluid in men, Artava in women (English language does not have any term for Artava) and Ojas, and the vital force, in both. In Atharva Veda, these 7 dhatus/tissues have been referred to as the Sapta Matram (7 makers of the body).

In conclusion, the Ayurveda is a science which has a holistic approach to promote mental and physical health (prevention and treatment both) and happiness, improved quality of life and longevity. The goal in Ayurveda is on the equilibrium of the primary humors. Digestion of food and desire for eating, having good sleep without nightmares with timely discharge of bodily waste and proper coordinated function of mind and intellect.

Disturbance in food intake, day-to-day living, lacking a disciplined life and improper conduct in thought, speech and action leads to a disturbed intellect and these factors then become the cause of an illness.

Ayurveda has long been considered the 5th Veda or the Upveda of Atharva Veda. In fact, all 4 Vedas contain mantras which deal with health and wellbeing.  After the Vedas, reference to the medical science is found first in the Brahman Literature. Subsequent literature is somewhat scratchy until the time of Aitareya Punarvasu. One of his students was Agnivesa and he wrote Agnivesa Samhita. It is on the basis of this scripture that Sage Charak wrote his book Charak Samhita. The last 17 chapters of Charak Samhita are additions by Dridhabala. This book deals with medicine. Similarly, name of Dhanvantari is prominent in the field of surgery or Shalya Chikitsa. This may have been the basis of the Sushrut Samhita, the main scripture in the field of Shalya Chikitsa in Ayurveda. The last chapter of this book may have been written by nagarjuna. Both Charak and Sushrut seem to have existed around the 6th century BC.  Next in line was Vagbhata who probably existed in 2nd century AD. He summarized and assimilated the works of Charak and Sushrut in the form of his two books. These are Ashtanga Samgraha and Ashtanga Hridya. Some say that the author of these two was the same person; others feel that these two were two different people. These books are quite similar and divide the Ayurvedic science in to eight different parts. These 8 parts are general medicine, pediatrics, psychiatry, surgery, toxicology, geriatrics, sexual dysfunction, as well as eye, head and ENT. The word charak actually means the one who has travelled and learnt.  The word Sushrut means the one who has heard well and learnt. The word Vagbhata means the one who is eloquent in communication. Sage Charak, Sushruta, and Vagbhata together have been correctly called the Brihat Trayi.

From 8th to 11th century A.D., there were also a series of scholars who did quality work in the field of Ayurveda. These academics are Madhavakara who wrote Madhav Nidan, Bhavmisra who wrote Bhava Prakash and Sarngadhara, who wrote Sarngadhara Samhita.  These three scholars together have been labeled as Laghu Trayi, or the lesser threes.  For the next several centuries, very little progress took place in the field of Ayurvedic medicine as India endured through a multitude of invasions by many foreign forces.  However, most of what is available today comes from the original texts and that which is new is simply a revival of the original.  There has been some research of late, and there are over one hundred Ayurvedic medical schools in India and a few Ayurvedic research institutes as well. Modern medicine was almost nonexistent 400 yrs. ago. There was a statement by Moliere in 17th century that “physicians are people who poured medicines of which they knew little into the bodies of which they knew less.” Today we are all impressed and dependent on modern medicine for our medical care. Parallel development has not occurred in Ayurveda. Actually the basic approach to health is quite different in Ayurveda. The details are as follows:

Vedic teachings state that “the illnesses are based on Poisoning, infection and disturbances in Doshas”. Different fevers have been described. These could be with chills, simply high fever or cough predominance. Change of seasons brings fevers. Again, irregularity in routine and uncleanliness and obesity have been described as the reasons for fever. Atharvaveda states that being in place with more precipitation, forest and lack of sunshine increases the chance of fever.

Poison can gain access to our bodies through injection, ingestion, poisonous animal bite etc. It is also mentioned that only poison can cure the poisoning Infectious organisms have been described as visible and invisible They exist everywhere and gain access to our body and causes illness. It is quite amazing that both bad and good bacteria have been described. Today, probiotics are used extensively and more and more studies are proving the usefulness of probiotics. Many diseases caused by different types of infectious organisms have been described. Vedas describe the diseases to be both mental and physical. Excessive lust and ill thoughts are considered serious reasons for illnesses as well.

Rg. Veda describes 3 types of medications: divine, earthly and watery. Pranayama has been given considerable importance in disease management. Eating small, wholesome and timely meals as well as avoidance of constipation have been considered quite important. Good thoughts, purification of mind, being peaceful, use of appropriate medications and doing Yajna on a regular basis have been considered the main way to manage diseases.

In summary, both the ancient system of medicine such as Ayurveda and Modern medicine has a place in maintenance of physical and mental health and wellbeing and treatment of illness. Ayurvedic concepts, even though they have existed for thousands of years, seem very modern as these pertain to the basic principles of living and life style modification as the main stay of management of illnesses. There is absolutely no question that the benefits of Yogic practice with emphasis on Pranayama and meditation exceed any comparative item that modern medicine has to offer. However, modern medicine has gone ahead by leaps and bounds in management of specific diseases and is and will remain the main stay of treatment of most illnesses. Further research in Ayurvedic medications may produce some gems and should be perused.

END_OF_DOCUMENT_TOKEN_TO_BE_REPLACED 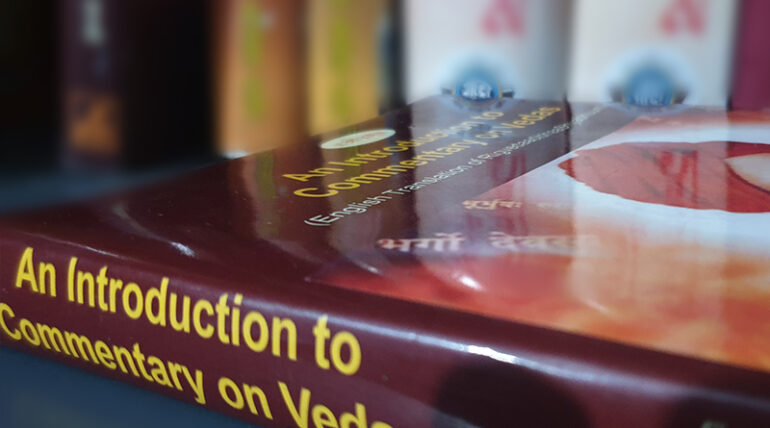